5 Things You Can Make From Cocoa Beans

5 Things You Can Make From Cocoa Beans 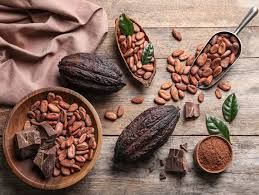 Cocoa, which is usually associated with chocolate, is truly an incredibly versatile bean. Its history has revealed to us that it can stand the test of time, and it has certainly adapted to every era. Right now, these following things show the versatility of the cocoa beans and how they being put to good use in our products.

The cocoa powder is made through a method of drying the fermented and roasted cocoa beans, extricating the butter from the solids, and then milled into a fine powder, which is then used in a number of foods. Baking chocolate desserts and chocolate cakes almost always call for good quality cocoa. Furthermore, many hot chocolate lovers prefer the taste of cocoa to store-bought hot chocolate.

cocoa bean made into cocoa butter as well. This sumptuously thick butter has a distinct and delicious smell and is used in a number of beauty products. It is rampant for its amazing moisturizing effects. It is also used to make chocolate, mainly white chocolate.

Again, this bean ingredient (actually, the main ingredient) used in the production of chocolate. Though it may sound a little like a fermented beverage (chocolate liqueur), it actually has no alcohol. Cocoa Liquor is solid and unsweetened baking chocolate that is utilized as a base for making chocolate and other sweet chocolaty treats.

One of the most surprising uses of the cocoa bean is its use for animal feed. In point of fact, it is the husk of the cocoa pod that is cut up into flakes, which are then milled and formed into pellets, to be dried and served as tempting animal feed.

The cocoa bean husk can be an effective and nourishing fertilizer. Cocoa bean mulch is a good alternative to mulch made from other ingredients as it has a slightly better fragrance, and it also has a lovely rich brown color that spruces up a withered and weathered garden. It is also said that cocoa husk mulch lessens water loss, diminishes the growth of weeds, and nurtures the soil beneath it all in one. Using cocoa bark also puts to great use a part of the cocoa pod that would have perhaps just become a landfill.